High above the windswept moors and darksome woods, the village of Hirot is under siege. Each night, as the sun sinks beneath the western mountains and the candles burn low, a devil-beast stalks the village streets, unleashing its savage fury on the living. From warlord to pauper, crone to child, no one is safe.

Defeating the immortal hound will require more than mere blades or even spells. To slay the beast, the characters must delve into the mysteries of the land and its Savage Kings. Only then, armed with relics forged from a bloody past, can the most cunning and courageous of adventurers challenge the hound of Hirot!

#67 Sailors on the Starless Sea

Since time immemorial you and your people have toiled in the shadow of the cyclopean ruins. Of mysterious origins and the source of many a superstition, they have always been considered a secret best left unknown by the folk of your hamlet.

But now something stirs beneath the crumbling blocks. Beastmen howl in the night and your fellow villagers are snatched from their beds. With no heroes to defend you, who will rise to stand against the encircling darkness? The secrets of Chaos are yours to unearth, but at what cost to sanity or soul?

Eons-old secrets slumber beneath the forbidden Ghost Ice. Since the time of the Elders, the local tribes have shunned the crawling glacier, knowing it as taboo land that slays all who tread its frigid expanse. Now, the Ghost Ice has shattered, revealing hints at deeper mysteries entombed within its icy grasp. Strange machines and wonderful horrors stir beneath the ice…

A whispered voice calls from a coffin bound in chains, urging the heroes into the depths of the Shudder Mountains, a place rife with superstition and forlorn secrets. In the shadowy, pine-grown valleys of the Deep Hollows lurk mysteries of a bygone age and a new evil emerging from the ruins of the past. The adventurers must plumb the mountains’ secluded reaches to root out this rising terror before its power comes to fruition. Standing in their path are cackling witches, subtle devils, lingering spirits, and a foul thing that moves in the night. Can the heroes appease that which lies within the Chained Coffin and thwart the dawn of a new and terrible age?

#84C Escape from the Purple Planet

Every 10 years the dying sun sinks into eclipse.

Every 10 years the tribes cease their warring, gather at the Gladiator Stones of Ul’tok, and cast offerings into the pits, praying that their masters find their sacrifices worthy.

This year, you are that sacrifice. In order to win free, you must best all challengers, or try your luck in the pits beneath the arena. However you escape – whether by blade or by cunning – you must find your way free before the wierdling sun rises once more, and the hordes of kith return to their forever war!

This short adventure includes an appendix for creating characters from the Purple Planet, as well as notes for bringing PCs from the modern world in true Almuric-style!

The Lady in Blue, a mysterious figure of cosmic power, enlists a band of simple peasants for a strange task. They are to follow an invisible bridge until they arrive at a hole in the sky – and then jump through. Death awaits all but the bravest, strongest, and luckiest, but the Lady offers a reward beyond all the riches of the world: the chance to change the very stars these peasants were born under, and thus change their destiny.

Not a dream! Not a hoax! Not an imaginary tale! It’s the crossover you’ve always wanted: the legendary Grimtooth the Troll meets Dungeon Crawl Classics! This adventure module is written under DCC RPG rules and is officially licensed by Flying Buffalo, Inc. to include the Grimtooth character.

After three decades of preparation, the evil troll Grimtooth has finally thrown wide the gates of his abode to all comers. The troll has sent ravens far and wide inviting delvers to share in the vast wealth of his treasure room. Of course, there is a catch. The adventurers must wend their way through a maze of traps in Grimtooth’s Museum of Death, a curated collection of the deadliest and most devious traps ever assembled in one place. Along the way, they might even cross paths with a few of Grimtooth’s allies: Grimtina, Spike the Grimdog, and Sludgeworth. Tread lightly, delver. There are no refunds for this tour.

The village of Portnelle is once again bright and festive. After years of feuding, the town’s most prominent and influential families will finally be making peace as the youngest generations are joined in marriage. However, when an evil born of dark secrets refuses to stay buried, blood will flow like wine at the reception.

This wedding is one your fellow villagers will talk about for generations!

The doom of Sezrekan is writ large in the stars. However
– perverse to the end – the warlock refuses to accept fate’s
decree and will do everything in his power to escape his
doom, even if that means bringing an end to the multiverse.
Crucial to his plans are three artifacts: the Crown of the
Seraphim; Tyrving, the cursed foebrand; and Tarnhelm, the
dragon-helm.

All three relics can be discovered through the course of the
adventure, and turned against the Master’s servants. However,
the artifacts’ powers come at a price: activating the
relics courts disaster.

A group of normal folk from 1970’s Earth find themselves magically transported to another world and embroiled in the Dragon-Wizard’s sinister ritual. Can they stop the reptilian enchanter and escape his stronghold, or will they be slaughtered like the hapless nobodies they probably are?

Seeking wealth and escape from their peasant lives, the characters investigate a supernatural portal that appears only once every half-century when the stars are right. The portal leads to the burial tomb of a war-wizard of eons past. The characters must fight iron men, a demonic snake, the living dead, and a variety of strange statues to recover the treasures left by the warwizard.

With each new generation of younglings, the Tribe of Cog tests their youths’ fitness to serve their neolithic society as adults by sending them out on The Rite of Passage. The purpose of the Rite is two-fold. First and foremost, the younglings are tasked with going out into the untamed wilderness, surviving on their own for over one week, and with bringing back to the tribe one functioning artifact of the ancients per participant. Secondly, it is to be hoped that the stresses of the Rite will trigger the “Metagenesis.” For mutants, manimals, and plantients, the Metagenesis is the sudden full-flowering of their mutated genetic code and its attendant mutations.

RC1 The Hypercube of Myt

The keep of the legendary wizard Mytus the Mad was razed, looted, and ransacked generations before your oldest ancestor was born. The only reason the chaotic sorcerer’s name is still whispered millennia after his death is because of what lies half-buried amid the scattered flagstones of his long-vanished keep: The Hypercube of Myt. Each year on the vernal equinox, the southern entrance unlocks itself from sundown to sunrise. And this is precisely why you are here now, at the annual Festival of the Fatted Calf. The festival is famous for drawing the curious, the foolhardy, and the uncautious from far and wide to ponder the mysteries of the Cube. After the more sensible denizens of your village begin to stagger home, you and your friends continue drinking grog-laced ale and speculating on the nature and contents of the immutable Cube. Is it a treasure vault guarded by extra-planar forces, or perhaps a gateway to another time and place?

Who says you have to be name level to visit another plane? Teams of level-0 PCs will be recruited (kidnapped) by extra-planar forces (Elder Prime Ones) and pitted against each other in a contest (death match) to see which alignment prevails: Law, Chaos, or Neutrality. Your patrons and deities will not only be rooting for you from the cheap seats, they’ll provide each side with artifacts of incredible power. Plus, you’ll also have your level-0 trade goods. Who knows when that chicken or sack of night soil will come in handy?

After a night of fitful sleep and fevered dreams, you awaken and step outside your thatched cottage to greet the coming day, an apocalypse greets you eyes instead. You quickly discover that the dirt streets and back alleyways of your village are now overrun with hordes of the shambling un-dead. Quickly glancing to the scattered few friends that you see standing about equally shocked, you grab the nearest crude implement that you can find and form a circle standing back-to-back — desperately hoping that there is somewhere to run and hide, and that things don’t get even worse. Is that a vampire out in broad daylight? 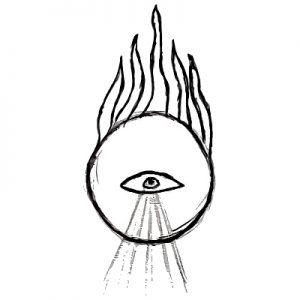